This is one last post for Halloween and I promise there will be no more (until next year). Poisonous, spooky and ugly is how this strange collection of plants is described, but you may find that they are already growing in your garden. The first is known as Angel’s Trumpet, but try eating it and you will certainly be bewitched. Mandrake is another of these spooky plants which causes terror when you hear its screams as it is pulled from the ground. All these and more are described by Andy McIndoe in his article which I found on the Learning With Experts website.

I thought I would conjure up a few ghoulish characters from the magical world of plants for Halloween and believe me, there are plenty of them. Some poisonous, some spooky, some just shocking in appearance, but all with fascinating stories. Plants with surprising qualities still hit the headlines and shock the modern world when their hidden powers come to the surface. Never assume that the insignificant green plant growing in the hedgerow or garden is harmless, it may have the ability to get the upper hand?.

The so called witches? weeds include plants used to make magical potions. Often poisonous, in smaller quantities them may be hallucinogenic, anaesthetic and sense numbing. There may be a scientific explanation behind their properties, but their powers may be seen to go far beyond the barriers of science if you are a witch or believe in her magic. 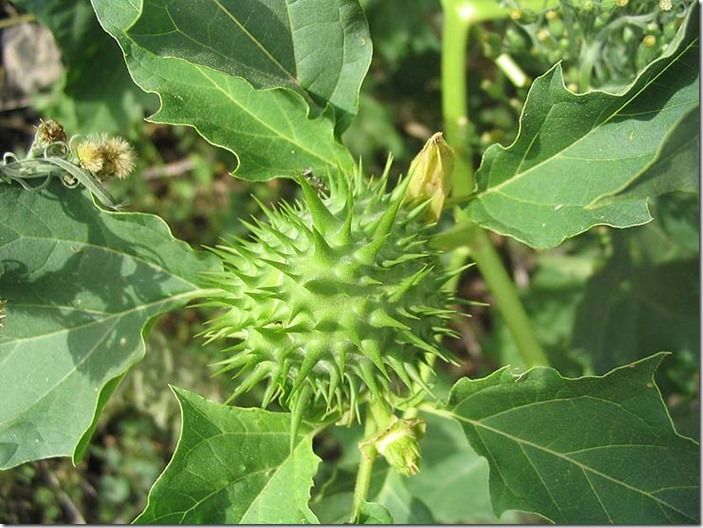 Take Datura stramonium, for example. Sometimes called thorn apple because of its prickly fruits. Sometimes called angel?s trumpet because of the form of its flowers. Also called devil?s trumpet because of its poisonous qualities. You may find this relative of belladonna growing by a roadside in Greece of Turkey, or it may turn up unexpectedly in your garden. It also has the curious name Jimsonweed. The name is attributed to a garrison of soldiers based in Jamestown. When they ran out of food they picked and ate the fruits. Discovered in various places throughout Jamestown days later they were delirious and naked because of its powerful hallucinogenic properties.

Go to the next page to see more witches weeds or spooky plants for Halloween.